It’s an amazing feat, although its a shame that the photo had to be of a nearby control tower and runways. Still, I guess getting a cute dog on a skateboard to stand still for half an hour is even harder than building a three-story camera.

DPReview has a 27 pages Fujifilm FinePix X100 review. I haven’t read it yet, I’ll let you do so.

Coffegeek “review” of the X100. He covers it under an angle of what’s wrong, which is different from the usual reviews. And still:

All this said, I really do like this camera. I feel let down a bit by the UI, but I also know time will soften this as I get more used to this camera’s quirks. 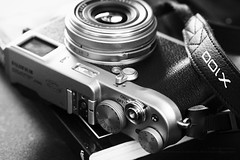 Photo by CoffeeGeek – Some rights reserved.

A 1000+ instant cameras collection (via PetaPixel).

Previously I was wondering if there was a camera renouveau. The highly anticipated Fuji FinePix X100 could be one of the contenders with its innovative viewfinder. The problem is that following the earthquake in Sendai, the Japanese production of cameras in Japan has suffered, making the X100 harder to find. This does not seem to stop the enthusiasm.

Nonetheless, people still start getting their hands on it. No later than last week I saw one at a local camera store, unfortunately no demo model. Here is a couple of recent reviews:

Steve Huff ask “Does it live up to the Hype?”. Steve Huff is a Leica M9 shooter but will compare the X100 to the Leica X1 which is must closer.

[…] those who want the X100 are looking for something fresh, new, exciting, small and classic. As I recently found out for myself, the X100 is all of that and more.

His perspective is from the photographer taking pictures, and the result. He answered the question positively.

DCResource with their usual format will go through all the usual details and review all the features in the camera. You can compare images between their other tests, and doing this between the X100 and the Olympus E-P1 is making me drool even more.
Their conclusion:

All things considered, the Fuji FinePix X100 is a very impressive fixed lens camera, and I imagine that they’ll sell a boatload of them, despite the price. It offers superb photo quality, good performance (in most respects), a rangefinder-style body with a one-of-a-kind viewfinder, and plenty of manual controls. The camera does have its issues, mostly related to buffer memory and the user interface, but for a first generation camera, Fuji has done a great job.

Previously, in case you missed these:

Popphoto has an article about 12 film cameras worth buying right now.

The tragedy in Japan has made the current DSLR market a scary place, making this a perfect opportunity to get (back) into film.

It seems to cover all the bases from medium format, compact to reusing lenses from your DSLR. But the most awkward in the list is the FM10 as I think they should have recommended an older model instead, one solidly built. Also notably absent are TLR or 35mm rangefinders like a Bessa.

What is interesting to see is that Ricoh is still in the same line of products with their Ricoh GR-Digital: highly praised compact camera.

Luminous Landscape as a very quick writeup on aerial photography by Jason Hawkes:

I first took to the skies back in 1990. Having just finished three years studying photography in London I really wanted to become a studio photographer after finding a passion for shooting on 5×4 plate cameras.

I happened to go flying one weekend in a weight shift ultralight aircraft, and whilst the the flying part was pretty fun what I really fell in love with was the amazing patterns you could see from 700ft.

Two weeks later I naively handed in my notice to the studio I was assisting in and, with the help of a bank loan, brought a microlight of my very own.

If you have ever read Earth from Above by Yann Arthus-Bertrand, one of the most famous published work, you’ll understand what this means.